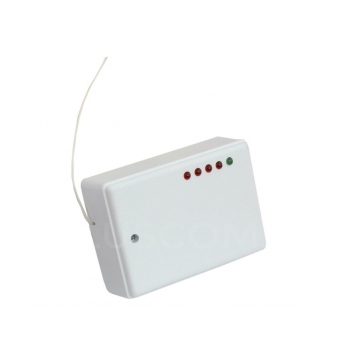 The principal use - in alarm systems as a unit which controls the work of other devices of the system, for example, sensors, blocking zones and detectors, or as an panic button. It can be used as equipment which controls remotely the work of a wide variety of devices, for example: gates and garage doors, barriers, window blinds, electromagnetic locks, lights, air-condition, etc.
The cooperation with other devices - both the receiver and the remote control of the RSU-KO4/1 set cooperate with any other device produced by us. There are no technical limits in creating other sets. The remote may control any number of the receivers under the condition that it is programmed into the their memory.
The operating range - the following range concerns the open space (without any obstacles, when the receiver and the pilot can „see each other”). If there are any obstacles between the receiver and the sender, one must assume that the range would be reduced: for wood and plaster it would be 5-20% lower, for bricks 20-40% lower, and for reinforced concrete 40-80% lower. If there are many obstacles we advise to configure the sets using the receivers of the SH class, to use retransmitters or stronger remote controls. If there are metal obstacles, using the radio systems is not recommended. In such situation, consider installing WLC 20 module, which helps to avoid the problem. The double value given in the technical specification of the remote control concerns cooperating with different types of receivers. The first value (the smaller one) concerns the superreactive receivers of the RSU type, the second one (the larger one) – with the superheterodyne receivers, for example OPC, IDO.
The receiver's Memory Capacity – the receiver from the RSU-KO4/1 set has the memory capacity for 56 buttons. For systems in which more senders are supposed to work, configure module WLC 201 with several receivers in LC version (one counts the memory capacity the following way: number of the receivers x 56; for example WLC 201 + 2 receivers RSU-KO4/LC means that the memory capacity is 2x56=112). What is important is the fact that in these receivers, deleting even one remote control from the memory means the necessity of re-programming the remote controls, which are supposed to stay in the system. For this reason we recommend using the IDO 500 receiver for huge systems (several dozen, several hundred remote controls) because it enables deleting the senders from the memory individually.
The receiver's operating modes: the monostable mode – pressing the button opens the relay for a set time. The bistable mode – after receiving the transmission from the remote control, the relay flips on the other state. The temporary mode – the relay is open as long as you press the remote control button.
The communication hopping code – the radio transmission between the sender and the receiver is based on the hopping code (KEELOQ® firmy Microchip Technology Inc.), which guarantees a high level of safety while using and resistance to radio signals coming from other devices. Each sender has its own individual code. The receiver reacts only to those transmissions which come from the senders programmed in its memory.
Frequency 433,92 MHz – the devices work on the frequency 433,92 MHz. This bandwidth does not require any special permissions and concessions for using it.